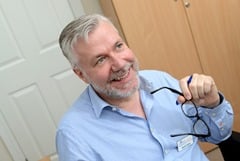 David Clarke is celebrating his 21st year anniversary at DBS. David is the founding director of DBS having started the business in California in 1996. Originally a Yellow Pages Advertising Agency David has overseen profound changes in the business over the years adapting to changes in web design, internet marketing and the birth of social media along the way. This year DBS became an employee owned business with all of its employees becoming certified shareholders in the company and Julie Priestley also promoted to Director alongside David.“I’m delighted for DBS to have reached 21 years this year” said David. “2017 will be looked back on as a landmark year for DBS”.