The 9 day event began and ended in the village of Llanfihangel y Creuddyn which is 7 miles from Aberystwyth. 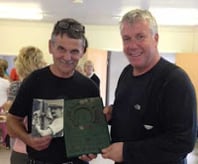 August 4th 2014 will be exactly 100 years since the outbreak of WWI and the last Tommies have passed away. Besides raising money for charity the event aimed to keep WWI and the sacrifices made in people’s minds. Each village was presented with a plaque which it promised to unveil on the 100th anniversary of the outbreak of war.

The picture shows David with the grandson of Catwick’s blacksmith holding a curious memento. Catwick is a double thankful village as every soldier who went to World War II also came home safely.

When World War I broke out soldiers took coins to the blacksmith who nailed them to the door as a token of good luck. When World War II came along soldiers called up did exactly the same thing. Every coin represents a life spared.

“The village churches and landscape were varied as was the welcome given by villages” explained David “in one village only a vicar and one parish councillor showed up whereas in Catwick (Yorkshire) Nether Kellet (Lancashire) and Llanfihangel y Creuddyn (Ceredigion) it felt like the entire village had turned out.”