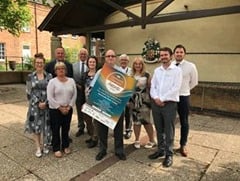 DBS’s James Hopkins was delighted to take part in the judging of this year’s North Kesteven District Council’s Community Champion Awards last week. The awards which take place every year are put in place to recognise those who have gone ‘above and beyond’ for their community. Out of 107 nominations made by thankful residents, the team of judges have picked out 28 finalists who will be invited to a celebration on Wednesday October 10th where winners will be formally announced. Last year, DBS themselves came away from the ceremony with the award of ‘Community Business’ of The Year. The award recognised DBS’s significant contribution to the village of Navenby through a range of initiatives including founding the Navenby Business Network, funding defibrillator units as well as supporting local charities and schools. DBS are pleased to be sponsoring this year’s award.