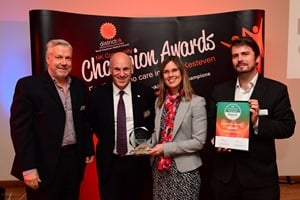 We’re proud to announce that DBS was named as the winner in the Community Business category at the recent NK Community Champion Awards 2017This category was to recognise “a company or sole-trader whose business initiatives and charitable, neighbourly contributions have made a difference to their local communities.” It was one of eight different award categories, and we were one of a record 28 finalists who were chosen from a list of over 80 nominations. DBS was nominated for the award by Navenby Parish Councillor Keith Lamyman. The awards were organised by North Kesteven District Council, who run them each year to recognise the efforts of unsung heroes who work quietly, tirelessly and voluntarily across a number of areas in the district. North Kesteven is one of seven districts in Lincolnshire. DBS is proud of its corporate social responsibility programme (CSR), contributing locally and internationally to worthy causes. Our director David Clarke founded the Navenby and Cliff Villages Business Network to bring together businesses and foster community links plus boost interest in the area. David helped the Business Network to organise the hugely popular “Christmas in Navenby” in 2016.DBS also made a very significant contribution to our community being equipped with three defibrillator units, a life-saving and essential safety measure for rural locations. All residents in the community now live within 500 metres of a defibrillator, which could save someone’s life.DBS provide website support to the Lincolnshire and Nottinghamshire Air Ambulance. We also provide a website free of charge to local charity Star Trust. DBS have worked closely with local schools Priory Academy LSST in Lincoln and the Sir William Robertson Academy in Welbourn for more than a decade to provide work experience opportunities.DBS is also active in two mentoring schemes. For the last six years we have worked hard to initiate and continue a mentoring scheme for University of Lincoln students in their final year. This mentoring service involves CV advice, conducting practice interviews and giving careers guidance to students who may be unprepared for the demands of the world of work.David also mentors for a Lincolnshire scheme called Mission Mentor, giving children in care in Lincolnshire a chance to gain valuable guidance on education and work as well as motivation. In 2016 David embarked on a trip that was to take DBS’s CSR to another level. During his trip to hike the Everest Base Camp Trail in Nepal, he learned of a Sherpa who had just died in an avalanche. He had left behind a wife and four children, with the eldest daughter just about to start nursing college. David and the team felt they must do something to help, and so made the decision to fully fund her education.The award was presented to DBS by Keith Philips from the sponsor for the award category, Chartered Accountants and Business Advisers Duncan and Toplis. DBS Directors David Clarke and Julie Priestley, and DBS Online Marketing Manager James Hopkins accepted the award on behalf of the company. 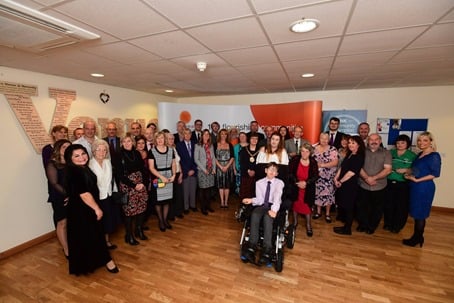 The ceremony was held on 19th October 2017 at The Venue in Navenby and was hosted by North Kesteven District Council Leader Cllr Richard Wright and Chairman Cllr Sally Tarry, and compered by BBC Radio Lincolnshire’s Rod Whiting. Short films were shown about each of the finalists before the winners were announced. The evening included live music, a complimentary buffet supper and a raffle and bar in support of the Council Chairman’s nominated charity, LIVES.The event was attended by over 150 guests, including the finalists, their guests and nominators.