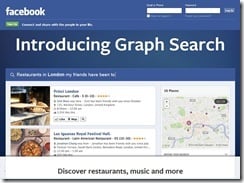 Facebook released a major new service called “Graph Search” on the 15th January, which it is now rolling out to users who have opted to try it.  This appears to be a surprisingly intelligent search tool which will allow Facebook users to search for information on Facebook. Searchable information will include photos, status updates and likes. Some examples of the searches you could carry out, provided by Facebook, include “friends who like dancing”, “photos of my friends before 1995” and “bands my friends listen to”. These are “natural searches”. When Graph Search cannot find what the Facebook user is looking for, the search will be powered by Microsoft’s Bing and notably not Google.  Whilst Facebook Chief Executive Mark Zuckerberg insisted that it was not a web search and therefore not a challenge to Google, it was seen by many in the industry as the next step in the on going Facebook vs Google battle. The launch of Graph Search immediately led to complaints that Facebook was once again playing fast and lose with users privacy. However, Graph Search only reveals what users had already allowed to be seen. So, for example, if you have a photo album that can only be viewed by your friends then only your friends will be able to find those photos when using Graph Search. However, if you have a photo album that is set so that all Facebook users can find it, then all Facebook users could, in theory, come across your photos if they put the right search into Graph Search. Graph Search just allows you to find what fellow users have already opted to share with you. To read more about our services for Facebook, click here.