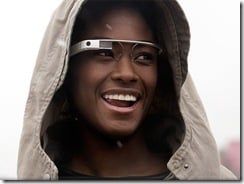 Google announced yesterday that 8,000 “Glass Explorers” will help to test Google Glass. These technological glasses with a built in camera and computer screen will allow the wearer to take photos, record videos and access the internet to use email and social media. They will also be able to take part in video chats, use maps, check weather forecasts and more. The device is voice activated and the display appears in a small, translucent area in the top right hand corner of the glasses.  Google posted a video of the glasses being used on YouTube as it launched the competition, seeking “bold, creative individuals” to apply to be among the first in the world to try the long awaited and long worked on device. However, the lucky winners of the competition will have to pay $1,500 (approximately £980) , plus tax for a pair, must live in the USA, and must explain in less than 50 words on Twitter or Google+ what they would do with the glasses. They must use the hash tag #ifihadglass. They are also encouraged to submit 5 photos and a 15 second video to accompany their application. The competition closes on February 27th, and the winners must pick up their glasses from either New York, San Francisco or Los Angeles. It is not expected that Google Glass will be on sale to the general public until at least 2014. Commenting on the development, Google said: “We’re still in the early stages and, while we can’t promise everything will be perfect, we can promise it will be exciting”.