National Employer of the Year Winners! 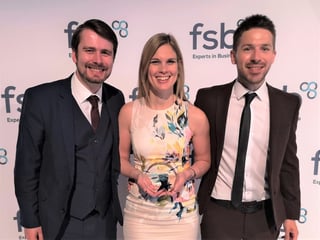 We are absolutely thrilled to announce that DBS Internet Marketing has been named as the FSB (Federation of Small Business) Employer of the Year for the whole of the UK!

We were absolutely over the moon when the FSB’s CEO, Julie Lilley, announced us as the winner of the award, and felt incredibly honoured and proud to go up on stage to be presented with the beautiful glass trophy.

A key factor in us winning this award is that we became Lincolnshire’s first 100% employee owned company in June 2017 when DBS Director David Clarke announced that members of the DBS team would now own a part of the long-established internet marketing and web design company.

David said at the time: “For me, it makes great business sense to reward the very people that have helped to build DBS. Now that the whole team has equity, we have a vested interest to grow the company even more.”

Commenting on the award, DBS Director Julie Priestley said: “Our business is service-based and so relies on our employees to give the best service to our clients.  By investing in our employees and giving them a vested interest for the business to do well our team give the best customer service to help our clients succeed. Words cannot describe how proud I am for Team DBS to receive this award, all of the congratulations and good wishes we have received from fellow businesses has been very humbling.”

The UK Final was described as a glittering event, and it didn’t disappoint! Held at Evolution Battersea, the evening started with a drinks and canapes reception, and then a speech from the Chancellor of the Exchequer, the Rt Hon Philip Hammond MP, which was especially impressive considering it was the day of the EU Elections and the evening before the Prime Minister announced her resignation! We were all quite surprised that he had taken time out from the political events that were happening to attend the event!

Other high-profile politicians present included the Small Business Minister, Kelly Tolhurst MP, and the former Commercial Secretary to the Treasury, Baroness Neville-Rolfe. During the formal awards dinner there was a speech from Mike Cherry OBE, the National Chairman of the Federation of Small Businesses, and a pre-filmed speech by the now outgoing Prime Minister, Theresa May. In total the event was surrounded by over 500 guests from across the country, including area winners, judges, sponsors, media, MPs and industry business leaders.

The evening was hosted by the actor, writer and comedian Meera Syal CBE, who found fame in the 1990s and 2000s starring in Goodness Gracious Me and The Kumars at No. 42. She hosted the evening with an appropriate mixture of humour and seriousness, making the whole event entertaining as well as interesting. There was also a very moving presentation by Sean, an ambassador for the FSB Chairman’s Charity for the last year, the Rainbow Trust, that supports families with a seriously ill child.

The FSB Awards website states that “the annual awards, run by the Federation of Small Businesses (FSB), celebrate and recognise a sector that makes up 99.9 per cent of all private businesses in the UK and contribute £1.9 trillion to the economy.

“The 5.6 million small businesses and the self-employed in the UK contribute so much to our economy and our communities. In 2017 FSB launched the Celebrating Small Business Awards to recognise the best, most innovative and most determined of these, from every sector, industry and background.

“Recognising the huge value that being a finalist or a winner can bring to their businesses and teams, more than 2,000 businesses entered the 2019 awards.”

Many congratulations to the winners of the nine other awards announced last night, and congratulations to all of the finalists who did fantastically to get to the national final. Huge thanks to the FSB and the sponsors of the event for an absolutely incredible evening.