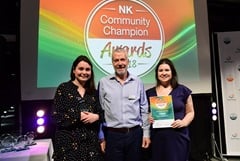 DBS Director David Clarke was delighted to attend the NK Community Champion Awards earlier this week, which this year was held at the International Bomber Command Centre (IBCC) on Canwick Hill, overlooking Lincoln.The illustrious event recognises the best examples of community effort and individual achievement within the North Kesteven community, honouring winners in nine separate categories. Last year DBS were awarded the accolade of ‘Community Business’ of the year and as such were very pleased to sponsor the award this year. DBS’s James Hopkins joined a team of judges in August to pick out 28 brilliant finalists from over 107 nominations made by residents of the North Kesteven district. This year’s winner of the community business award was Leadenham Teahouse, a tea room that provides support for residents and smaller businesses and provided drinks when the village was beset by flooding. Other finalists in the category included AF Blakemore and Ringrose Law. We would like to offer our congratulations to the winners, the finalists, and everyone that was involved in this wonderful event. Click here to view the full list of finalists and winners: https://www.nkawards.org/winners-and-finalists-2018

END_OF_DOCUMENT_TOKEN_TO_BE_REPLACED

Julie Priestley, General Manager at DBS, was delighted to pay a visit to the International Bomber Command Centre in Lincoln on Thursday 15th September as part of the Business Women’s Link group (BWL). The site which sits on Canwick Hill aims to gather and conserve the history and heritage of the Bomber Command. It features the tallest memorial construction in the UK - a 31.09m spire which is the actual wingspan of a Lancaster Bomber. It also houses a commemorative Wall of Names which currently includes 27,296 names of servicemen with plans for further names from across the UK, Europe and the Far East to be added. Once finished the centre will include a peace garden and the lottery funded ‘Chadwick Centre’, named after the designer of the Lancaster Bomber. This will house resources, artworks, exhibitions, shops, multimedia suites, corporate entertainment and a restaurant. Commenting on her visit, Julie said: “The work and detail that is going into the centre is amazing. It is such a beautiful site for the memorial. What better way to commemorate all those young men who died serving to protect us. I can’t wait to visit again once it is completed”. During the Second World War Lincolnshire was known as “Bomber County’ as it was the Headquarters of 1 and 5 Groups and was home to a third of all the UK’s stations, with many well known-operations beginning here. Over 125,000 men served in the aircrew of the Bomber Command during the Second World War and sadly less than 70,000 of them returned.