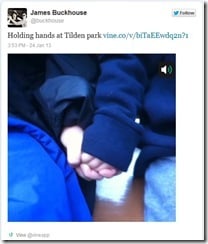 On the 24th January, Twitter introduced Vine. Vine is a new mobile app that allows you to create and then share short videos on Twitter. It was acquired by Twitter in October 2012. Just as brevity is everything with a Twitter status (your tweets are limited to 140 characters in length), so too it is the case with Vine, as the video clips, which loop, can only be a maximum of six seconds long. So far Vine is only available through the Apple app store and has only been released on the iPhone and iPod touch, although it is expected to be released on other platforms soon, including Android. Originally, Twitter Vine was rated as suitable for 12 year olds and over. However, by the middle of this week, the app’s rating was changed to 17+ on the Apple app store, after a pornographic clip appeared in the “Editor’s choice” section, leading to a huge number of complaints. Twitter apologised, but because it cannot vet the videos before they go online, it has had to raise its age rating to the highest possible. The blogging service Tumblr and photo sharing service 500px have also seen their ratings changed to 17+ over the last couple of weeks. The NSPCC said that parents have a responsibility to check how their children’s smartphones are being used. For more information about Twitter, click here.